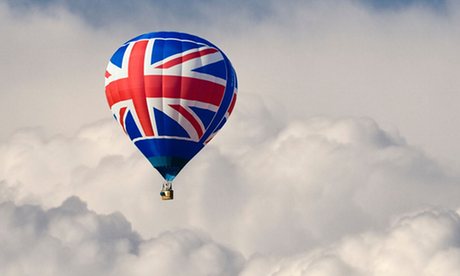 But where are we going…

Like living in a Monty Python sketch that isn’t remotely funny, the UK has unleashed forces of chaos beyond anything it imagined would happen. If only the big foot would appear and stamp us back to sense.

The United in United Kingdom was always slightly wishful, like calling an aggressive dog Serena. But it worked, and we burbled along, united more or less and without having to debate how we really felt about our nation every minute of the day. Scotland’s go at leaving two years ago petered out after the vote without grave consequence, despite continuing calls to rethink it.

But this week here, and all across the islands, the united feeling is gone. Citizens voted in or out—as stark a difference as being male or female, or a bird or a bee. And while there are many shades, and points of view, and arguments to be made, one’s neighbour, friend, relative may in this regard be the total opposite.

If it wasn’t for the chaos and crisis that now engulfs us like poisonous fog, reconciliation might be easier. But there is, as I write, no government leader on either side, nor is there any plan whatsoever for what to do now we’ve to cut ourselves from the mainland, though nearly half the populace didn’t vote for it, and many who did wish they hadn’t.

The collective regret is enough to fill a small ocean, next to the Sea of Sadness on the Coast of Anger. How did we as a nation manage such a feat of stupidity?

Ah, democracy! The cry on the Leavers’ lips. The will of the people has been heard. Any who dispute it are monkeys, hypocrites, villains. Which is a valid point, except for the alarming fact that the vote ended up so slimly divided on so important a topic.

And now we are waist-deep in debris from the wreckage that shows how seriously many people misunderstood what was at stake and were fed more lies than we usually expect at such events by the talking heads and the spouting media.

Britain’s biggest newspaper, The Sun, with nearly six million readers, and a fruit of the Murdoch tree, came out before the vote strongly in favour of Brexit, urging readers to make a leap of faith— “BeLEAVE in Britain” the front page shouted.

The very next day after the result, it published a more realistic take on how leaving would affect people’s lives, which told a very different, grimmer story. Readers were appalled. Why didn’t you tell us that before? the comments section cried.

As Murdoch once terrifyingly told Anthony Hilton, business editor of The Evening Standard, when asked why he was opposed to the EU: “That’s easy. When I go into Downing Street they do what I say; when I go to Brussels they take no notice.”

Many a voter has found out they were hoodwinked. That their anger and frustration at the unfairness they feel about modern life has been used for an outcome they didn’t expect and which in the long run is likely to cause them more anger and frustration. The papers of the people are rarely in the interests of the people who read them. They’re in the interests of selling papers, of business, of continued elitist power.

Whilst the clarion call of democracy is sound, the reality is that we are more than a democracy: we are a parliamentary democracy. The vote is not binding, parliament must decide. But to ignore or overrule it risks the one thing we cannot do: to be, or be seen to be, undemocratic. It’s already bad enough many view us now as the world’s new fool (though Trump may restore the status quo).

Three quarters of Londoners voted to remain, as did three quarters of young people nationally. And many more besides are dedicated to stopping the worst of the fallout—the racism and bigotry, the vandalism of liberal progress.

The economic mess will be harder for individuals to improve because it relies on a bewildering mass of bureaucracy and agreements, all of which must be rewritten. And though there may be something refreshing about cutting through the frivolity to review how the future could be improved, to do it this way puts the crazy back in crisis. It’s easy to feel dismay, leaver or remainer, at the sheer work that awaits.

And what of hope? For there is precious little around right now and it’s a beacon we need. We must find new ways, create new ways, to mend what is broken and to forge new relationships with our European friends—many of whom feel understandably jilted. Out of this crisis must arise new alliances, new assurances, restored friendships. But it’s looking a long and rocky road and many years of travelling.