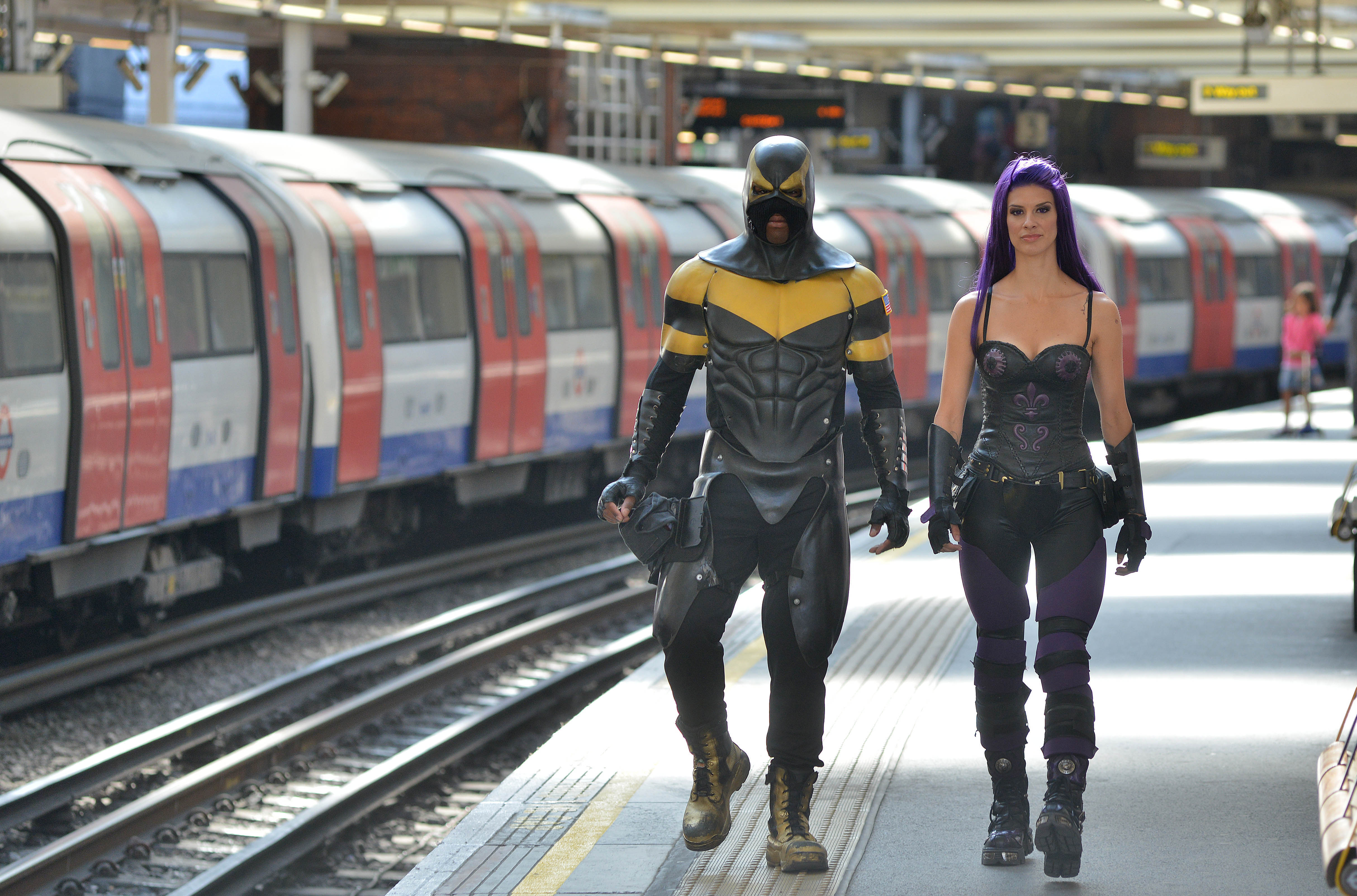 Superheroes are walking planet Earth, and not just little people. Dressing up expands identity, say fans, and it’s a budding movement, all ages welcome. But can a new elastic me match the hype? To the bat-cave!

I know plenty of kids, as I’m sure you do too, who like nothing more of a morning than to kit up in their superhero costumes and head off to save the world. A mask, some latex, a plastic weapon perhaps tucked away just in case, and the world is turned into a wonderland. Call it dressing up and pretending, but that doesn’t do it justice. It’s much more. Unlike life in civvies, it’s the chance to feel what it’s like to make a difference.

What began in US comic stories in the 1930s is now in nearly every child’s bedroom, video stream, lunchbox, dressing gown, and imagination. The same characters, the same stories. The reach of American fiction has come full circle. Comics on one side, Hollywood on the other, merchandising all around.

We used to need our imagination to visualise characters and scenes. Now these are given, and instead, kids roleplay scenes they’ve seen in films, and watch and enact the same song routines over and over. Luckily, as a species, we love repetition. It’s comforting. Wearing a costume takes you straight into the action. What you do then, how you feel and think, is as exciting as it ever was.

When you dress up as an adult, though, you had better be doing it to be funny or to earn a buck or because you’re in showbiz, otherwise you are going to be labelled a nutter and treated as a five-year-old.

If – and it’s a big if – your timing is top-notch and your fighting skills slick as, then you might make it as a hero. A real life superhero. More people are at it than you may think.

In South-East London, we have the Bromley Batman, who has appeared at a string of crimes in progress. He was like a “battering ram”, reported the Evening Standard, when he beat off two racist thugs in Rochester.

In the last three years, the Bromley Batman has saved at least a dozen people from personal attack. He gives interviews. “I’d prefer to be called The Shadow,” he admits, “but I’m okay with the Bromley Batman.” He’s careful to hide his identity but he does have “a big, beautiful beard,” he told reporters.

So far, police have kept their distance leaving The Shadow to roam without explicitly trying to shut him down, which is rare. In most countries, where similar vigilantes operate the police aren’t shy of condemning them publicly. Brisbane’s own Captain Australia was pointedly asked by police not to intervene in any more incidents. Good citizen he is, he’s been a lot quieter since, although his website describes him as “global, not local”, so he could be anywhere, preparing.

I lived for a few months as a student in Lille, northern France. My host, Jean-Paul, owned the brasserie downstairs. The flat had a rugby-sized bathtub and an old Alsatian dog called Wolf. One day, after we had got to know each other pretty well, he told me about his own vigilante acts. He didn’t dress up, he said, or go out looking for them, but on three occasions he had found himself at the scene of a crime and decided to get involved.

The first one was at the garages behind the brasserie. Coming home one night and about to park, he saw a man attempting to rape a woman. He sped his car up and pinned the attacker to the wall, shouting at the woman to run away. He then stashed his car a few streets away. By his account, he killed the man. It was in the papers the next day. The other two incidents were similarly serious, but not fatal. I remember feeling scared, impressed, shocked and believing him utterly. Within a week I’d packed my bags and moved out, for other reasons too. But I’ll never know if that was his intention all along.

I forgot to ask him if he wished he wore a mask. (France has few real-life superheroes. Even self-styled Citizen French actually lives in London, and with his black hat and yellow wraparound shades looks like Ali G.) Usually in comic-book life, superheroes hide their identity to strike fear, protect loved ones, be a symbol, and provide irony for the storyline.

In real life, it shows how anyone can be behind the mask, anyone could have magical powers and fight on the side of goodness, and all without being held to account.

As a generation of kids grows up accustomed to wearing full kit costumes to play, it will surely become more acceptable and commonplace in adulthood. If life feels dull or you want to start over, and becoming Jack Sparrow, for example, just seems so much more exciting, then do it.

Actually, that’s a real example. Mother of four Amanda Sparrow Large (plain Amanda Large for years) was watching TV one night when she realised how alike she and Johnny Depp’s pirate were. A dare or two later from her kids, she went the whole hog and spent ten thousand dollars on tattoos, beard, outfit, dreadlocks, parrot. Now she dresses as Jack Sparrow full time and loves it. “The way he gets on with life, his freedom, his walk. It’s me, we’re the same,” she says, and swaggers off down the high street to do her shopping. 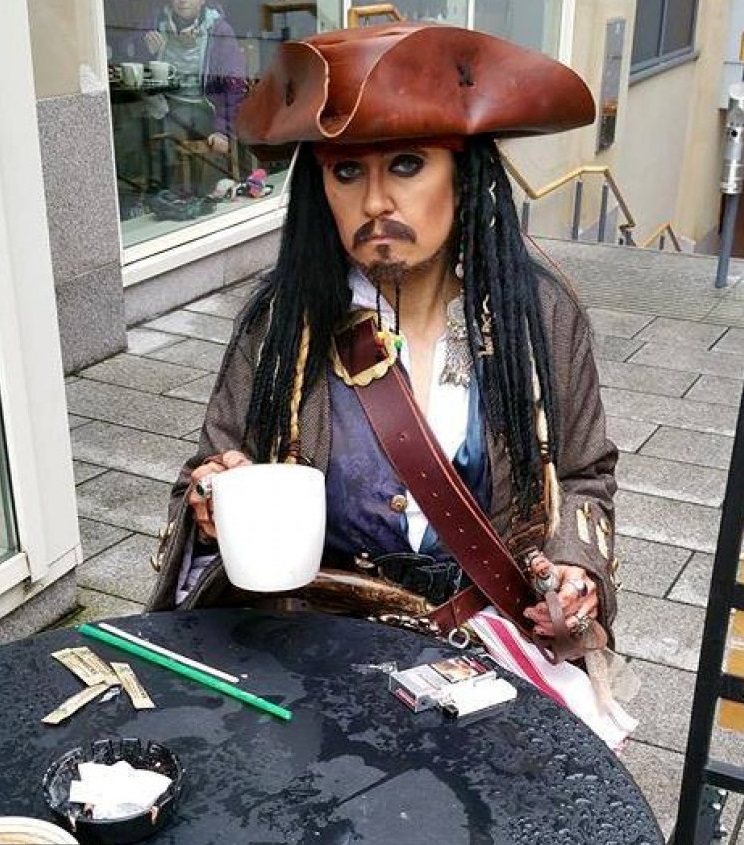